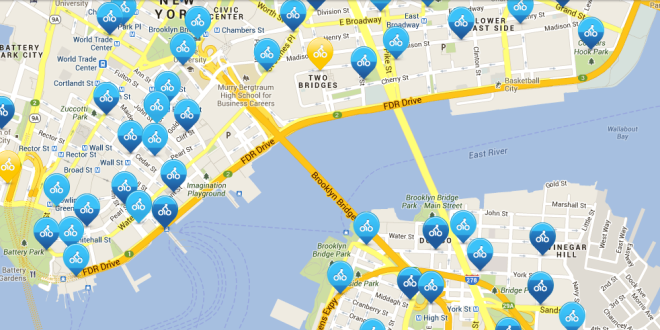 The launch last Monday of New York City’s much-anticipated bike-sharing program, the largest in the nation, set off a flurry of writing about biking in that city.  What most impressed me about the pieces, though, was not their number; it was the wide variety of media, modes, and styles used.  From the point of view of a writing teacher, one who’s also interested in places and how we inhabit them, it’s been a goldmine of ideas and examples.

A week before the launch, the New York Times published a short film titled “Ode to Bike Sharing” by animator Dustin Grella in which his friend Thatcher Keats looks forward  to the new bike-sharing program and reminisces about biking in the New York City of his youth, when there were no lanes, no helmets, and the streets were filled with detritus.  Now, he says, he’ll be biking in a much more “civilized” place.

Accompanying Keats’ memories is the whimsical animation of Grella.  It’s fun and lovely and exuberant.  Here’s a screen shot from the film (you can find a link to the whole thing at the bottom of this post).

The Times published a very different kind of piece a few days later, when the new program began.  Reporters tested the bike-sharing system against other modes of transportation (walking, subway, bus, taxi, etc.) in five races.  For example, in the “Tourist’s Scramble” (Race #3), three different reporters traveled from the Museum of Modern Art to the Empire State Building: one by bike, one by subway, and one by pedicab.  The winner?  The biker took 12 minutes and 44 seconds to get to the destination;  the pedicab user took 25 minutes and 24 seconds; and the subway rider took 39 minutes and 48 seconds.

The piece not only includes an elegant little chart detailing the races, there’s also a little film about the reporters scrambling around town.

Then, yesterday, the Times published a wonderful little multimedia essay by its legendary fashion photographer Bill Cunningham.  In “Spoke Spinners,” Cunningham talks with his usual charm over a stream of photographs he’s taken of New Yorkers on bicycles.  Here’s a screen shot:

So, here you have three very different approaches to writing about biking in New York City – all of them incorporating words and images in ways that are both informative and appealing.  And all of these forms are accessible to young writers.

There are, of course, other ways to bike-write: I’ve read in the last few days pieces written in question-and-answer format, blog posts, op-ed essays, maps, etc.  And there are other attitudes one could take besides celebration and delight.  Although New York City’s bike-share program has already exceeded expectations for ridership, there are critical ways one could read the project.  There has been discussion of its high prices and corporate sponsorship; residents have objected to the placement of stations in their neighborhoods; and critics point out how the program is blatantly concentrated in affluent parts of the city.  (According to a survey of riders of Washington, DC’s bike-share program, although African Americans make up nearly 51 percent of that city’s population, they represent only 3 percent of its bike-share users [Palmer].)

Still, on a recent trip to the city, my heart leapt at the sight of all those bright blue bikes on the busy streets!  And I couldn’t help but write about them myself . . .

For basic questions and answers about the program, click here.

For the NYC government site about the program, click here.

For one of Eric Randall’s several posts about the program in the Atlantic Wire, click here.

And for Streetsblog’s page on the bike-sharing program, click here.